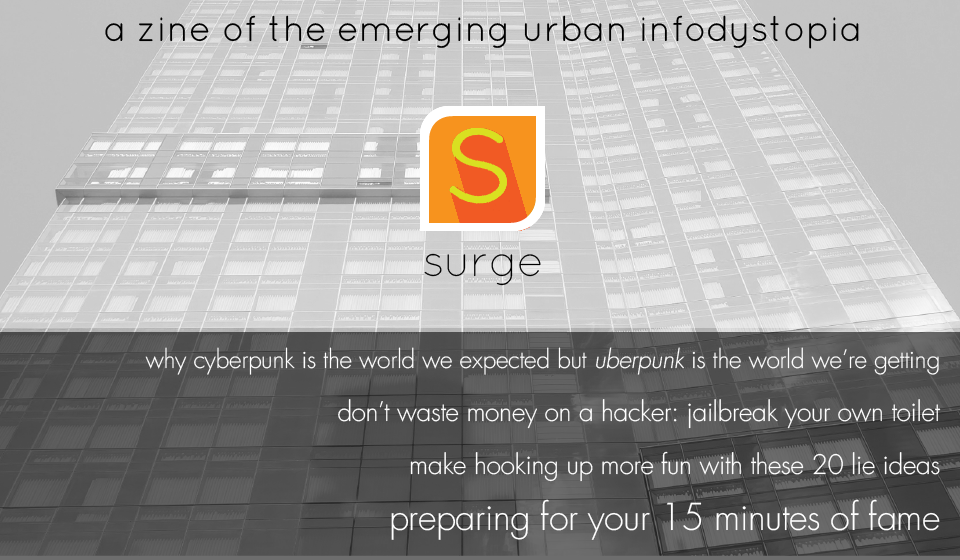 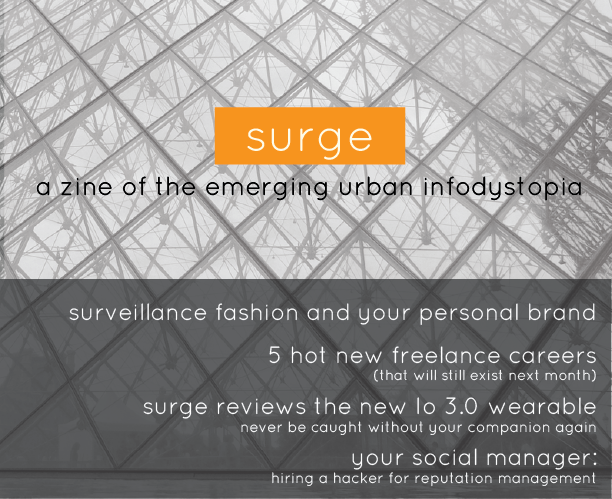 Our Town
What’s your all-time favorite town or city? Why? Would you ever move there if you could?
Reply 29
Of all the places I've ever been, San Diego was my favorite. It was a lot of city in a small package, condensed and livable, and I made friends there quickly compared to other places I've lived. I felt at home there. But at the same time, there's enough I dislike about it (the incredible superficiality and shallowness of Southern California to begin with; I don't feel like as much of a freak up north) and there's also the fact that it's just not a very affordable place to live. Which would be fine if employment balanced with it, but it doesn't. Not in my field.

Take this job...
Do you ever think about changing careers? What do you dream about doing? What prevents you from making the switch?
Reply 21
Well, coming of age during a major recession (1990s) and then living through the dot-bomb, taught me a major lesson about work.

Don't get too attached to any one industry and don't take up careers that don't have laterally transferable skills. And don't paint myself into a corner in fields that are heavily dependent upon boom-and-bust cycles (the tech industry is VERY heavily boom-and-bust if you're in the front end, whereas back end programming is transferable to other kinds of programming if you skill-up for it or learn new languages).

So, no. I don't really have a "big dream" or "big goal" anymore. I am presently helping to set up a recruitment firm in addition to studying programming and web design (which builds on what I was already doing). There is a strong possibility that if the firm is successful enough, I will stick it out with recruiting over the long term, and do my creative/technical stuff as side interests and for clients - because the resume bullet points in people/sales type jobs are *always* transferable to other types of people/sales type of jobs and there are a lot of good management and teamwork resume bullet points with helping to start this firm, too, that will look better to a larger variety of future jobs than just being one more person who knows x, y, z computer languages and programs. It also gives me the opportunity to treat programming like a creative medium instead of dealing with the culture and politics of the techie world.

Teach Me!
If money wasn't an issue, would you go back to school to study something? If so, what would it be and why?
Reply 30
Yes! Fine art, science, music, and computers.

What if all the “math” about how we’re going to meet our partner, feeling like it’s less likely because we’re this or that group… like when I cry, “how many stable Jewish lesbian geeks are out there?!!”…

…is bullshit, because every person is an individual and so individual inside their own head that what they identify as doesn’t even matter… and what “group” you’re in and how “high value” you are really has nothing to do with “love odds” because there are no odds?

I know people who seem so improbable. People who are way out on the "outlier" end of things, who are not the people that we tend to think would ever find anybody.

On the other hand, I have known plenty of white, healthy, stable, middle class or above, Christian, cis, straight people with totally mainstream hobbies and interests… who can’t find anyone.

"Love math" says that there should be more people out there for *them*, than there ever were for the "social outliers".

And doing “love math” is just a way of depressing myself and a form of negative thought spiraling?

I’ve tried to start online games in recent years. But most people are SO OVERLOADED with social media that they’re involved with, that they’re not willing to join new boards/social media venues.

For example: the only venues that really seem to work with the game I ran, were live journal, and threaded message boards. Five years ago, it was MUCH easier to get people to join LJ if they weren’t already on it. But now the same people are overwhelmed with Facebook and Tumblr and whatever else they are on, and don’t have time for another social media account, and kick and scream about it.

The same people are more willing to join a new message board for some reason - but good luck getting them to stay involved in it because of how occupied they are elsewhere on the web.

I also have the same experience. People try to get me into new boards or new venues and I just won’t do it. I feel overwhelmed just being on Facebook and Tumblr. And I tend to be on boards on a very transitory basis, I drop in for a little while and then leave again.

...I don't feel like I can just TALK on Livejournal.

It reminds me of sitting with someone you really don't click with. And saying, "we never talk".

And you end up staring at each other and never talking, because the awkwardness is too great.

I don't feel like I'm actually in a social media environment. Not like Tumblr or Facebook are. I feel like I'm writing in Word and people just happen to read my stuff on occasion.

I have the same issue with venues like Blogger or Wordpress, which is why I've never successfully kept up a blog.

"Man of Tai Chi" is easily one of the most boring martial arts films I've ever seen and that genre has to work really hard to bore me.

Okay, on with season 3.
Where I left off, the intrepid heroes had finished off the Village People (ahem, the Ginyu Force). They were joined along the way by Vegeta, the vertically challenged sociopathic Prince of All Two and a Half Saiyans from seasons 1 and 2. He is important to discuss because past a certain point, DBZ is basically the Vegeta Show. Especially given that Vegeta spends more of the time actually alive than Goku does and is the character with the most actual character development over the course of the whole series. Also, he's without a doubt the most popular and iconic character of the series, even though Goku is technically the hero. Guys want to be him, girls want to do him. Despite the fact that he is actually an epic loser. Moving right along.

That picture sums up my feelings regarding what I went through to find a picture for you. That is what I want to do to my computer screen, either before or after I spork out my eyes.

So much bad art and so much Vegeta-Goku slash. I almost told you just to google him yourself. I don't want those pictures in my brain. And now I'm stuck with them in my brain. So thanks a lot.
Along the way we learn that Vegeta's Modus Operandi all along was to get the Dragonballs so he could gain immortality so he could vanquish this guy:

This character change on Vegeta's part strikes me as a massive retcon. Why? Because I study tropes a lot and because I'm a (sort of) writer myself and when I watch or read other people's writing, I can often see the gears turning.

"I'm going to get the dragon balls so I can wish for immortality to get vengeance on Lord Frieza" seems like a different motivation from his *apparent* motivation in the Saiyan Saga (season 1) of "let's get the dragon balls, so I can wish for immortality, so I can become supreme god emperor of the known universe muahahaha". So which is it, Vegeta? You can do whatever kind of alternate character interpretation that you like. This is the saga where he becomes a more sympathetic character, where he's basically retconned as "oh I'm evil because Frieza made me that way" which you get during this emotional death scene and don't worry, everyone dies on this show at some point or another. Death is just a minor inconvenience at best. Life is pretty cheap.  You also get this scene with a vision of Goku's wherein Vegeta is inexplicably naked. Which is I suppose some symbol of how he's been stripped of everything including his dignity, or some reference to how you don't take your clothes with you into the spirit world (except Goku did in Season 1 - this is lampooned brilliantly by Team Four Star). But if you google "why is Vegeta naked", you'll find it's a subject of MUCH speculation.

And eventually he comes back. Only to be wished to Earth and deprived of his revenge. He's going to be one butthurt bastard.

Frieza. I like Frieza. Frieza is one of my favorite villains ever, bar none. To me, the whole segment with Frieza had so much pathos that everything else from there was anticlimactic.

Plus there's Goku's I am Space Jesus speech:

Wherein (in the Funimation dub, not in Kai or the Japanese version) he sounds basically like some kind of Christian allegory. Personally, as someone who studied a little bit of Buddhism once upon a time, I liked this because it also was a bit reminiscent of the Bodhisattva Vow and reinforced to me what I see Goku as: a Bodhisattva. I like this version. I found it powerful and moving.

What I didn't find powerful or moving was the number of time Frieza transformed. WHY? It seemed pointless. "Let's just change shape! Ha!". Then he does it AGAIN. Why? Maybe it codes differently to people who are actual serious anime fans and to people who are, well, Japanese. I don't know.

There is also the fact that it just takes foreeeeeeever for anything to happen - how many frickin' episodes does Frieza spend powering up, and how long is that bloody fight? And it wouldn't be DBZ if much of it didn't consist of lots of posturing and having a long staring contest.

This saga to me is probably one of the best of the series (yeah, Team Frieza here - sorry, Cell and Buu fans). Frieza is an enemy I can immediately map to my own cultural canon because the world-destroying omnipotent fascist leader is pretty much a universal trope. I can look at him and recognize the same qualities in Sauron and Emperor Palpatine. I didn't find Cell or Buu as relatable, but more on them when I get to recapping that part of the series.
Collapse